In this travel blog information, tips and inspirations on the Greek Cyclades islands. Greece has the roots of the Western culture; the place where the Olympians first competed and don’t forget the rich mythology and the ancient buildings with massive marble sculptures. But not only culture lovers will love Greece, the nature is stunning too; rock formations, picture perfect beaches, impressive volcanoes and conquer the sea by SUP, kite, sailing boat or ferry. The villages and towns are a lust for the eyes with the white cute special shaped houses with some wine yards or olive groves in the back. The olives and feta are the main ingredients for the Greek dishes next to the fresh fish. But the Italian and Turkish influence are strong too, pasta and baklava can be eaten all over the Cyclades. 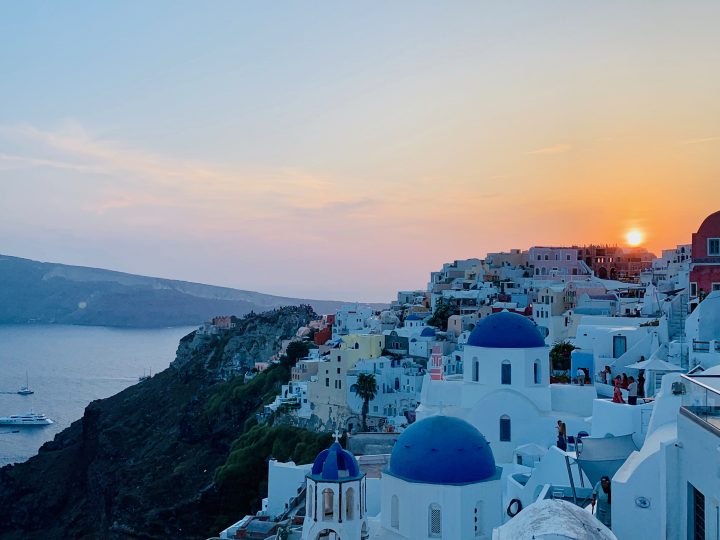 Warning: A record 33 million people visited Greece in 2018, making it one of the most popular destinations in the world. The downside is that Greece’s most iconic locations (Santorini) are also now struggling with over-tourism. So don’t expect to be the only one…

General Information for the Greek Cyclades

Greece is part of the EU so all European citizens can travel without a visa. Please check if your country beforehand if you need a Visa. The Euro is the currency in Greece. Cash machines can be found in every city or bigger town. Credit cards are widely accepted.

The costs in Greece and Cyclades are expensive in general, but it depends on the location and on which island you are. The local freddo cappuccino varied from 2,40 in Athens to 6 EUR with caldera view on Santorini. And an ice-cream with two bowls for 4,00 EUR, Gyros from 3-4 EUR and a main fish dish for ±20-25 EUR. 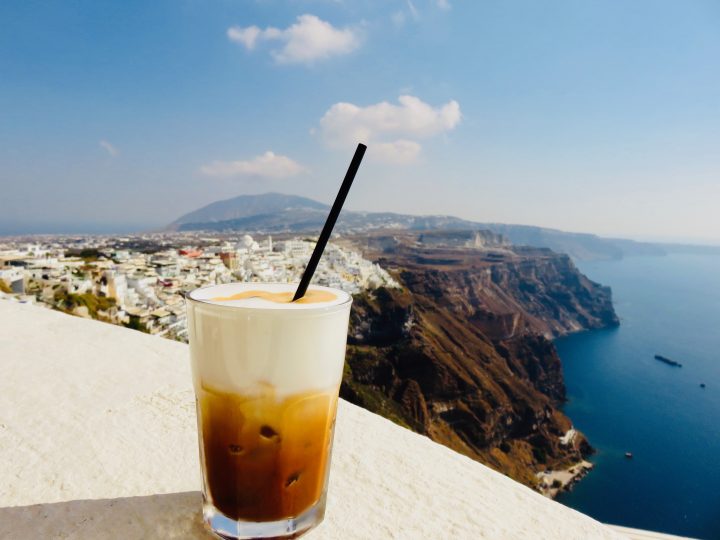 My mobile worked via my home network due to the roaming agreement; which was great! Greece has one hour time difference compared to the main part of Europe is a big advantage; no jet lag recovery needed! In Greece they speak Greek. A taxi driver explained to me he could speak three types of Greek: old, middle and modern. With my English I could manage myself perfectly.

I traveled in September, between the end of the high season and the beginning of the low season. Still the temperature was 25-30°C and no sweater needed at night. I suggest to escape the high season (July and August) and go in the so called shoulder season (April, May, June and September) if you can, the beaches, roads and accommodations are less full and prices are cheaper, while the temperature is still very good. Low season (October to March) could get chilly and rainy, most of the hotels and sights will be closed.

Tip: If you like windsurfing or kitesurfing, August is the most windy month of the summer they told me.

Transport in the Greek Cyclades

You can reach the Greece islands by ferry from ports all over Greece; you can bring your car too if you want. I booked all my ferry tickets with Seajets in advance online. They offer a fast ferries between the main Cyclades islands; I found them very professional and comfortable. 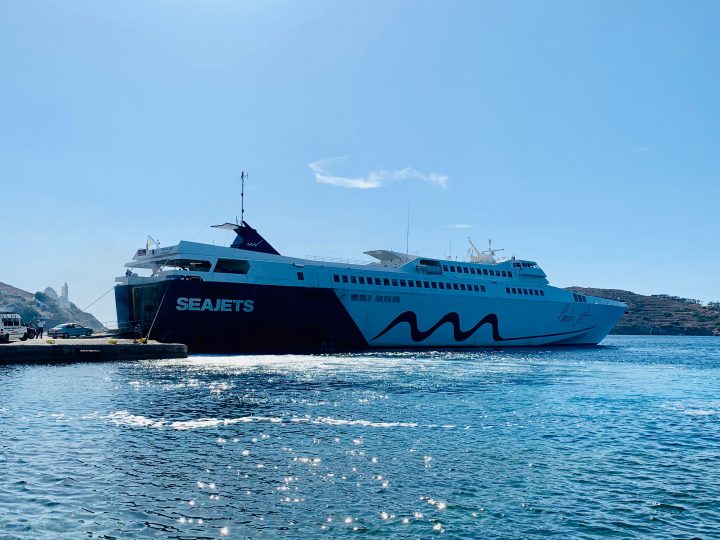 Tip: Check and print your boat ticket 1-2 days in advance at one of the agencies in the towns where you depart, departure time could change due to weather conditions.

Because Greece consist of thousands of islands, most of the transport in Greece is via water; boats, ferries, cruise ships, fisher boats, sailing boats, kiteboarding, surfing boards and kayaks. You can book trips to discover the magnificent coasts and blue waters via sailing boats or motor boats. See my blogs on Milos and Mykonos for sailing boat experiences. 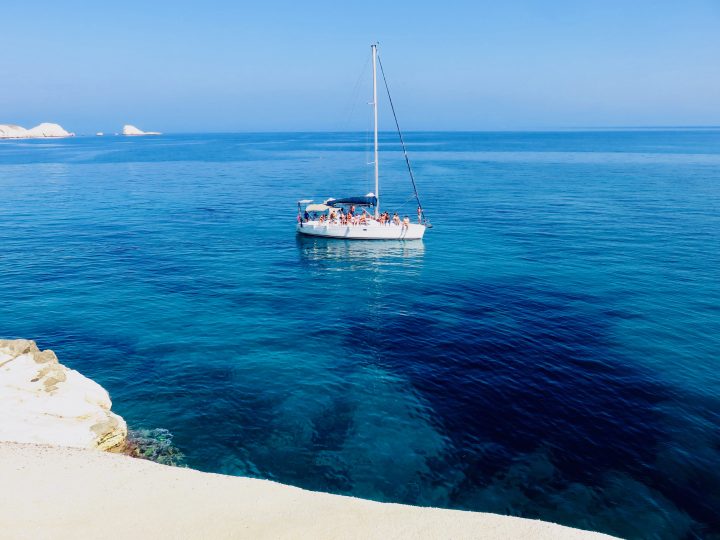 You can reach Greece by air like I did from Amsterdam (3-3,5 hours), but also from the main capital cities in Europe to Athens and bigger Greek islands.

Tip: Book two separate plane tickets to and from different airports or islands. This way you don’t have to take the ferry back and in my situation it saved me money and time too. The two separate tickets (I arrived in Athens and flew back from Mykonos) where the same as a round trip Athens. Click here for a 2 weeks Greek Cyclades route.

The roads in Greece are mixed, from perfect busy highways to empty dirty roads. In Greece it is very easy to book a car, motorbike or quad. With a European license you can rent them all. I rented a scooter/motorbike twice, on Milos and Ios (18-15 EUR per day). In Athens you can order a Uber and will get a regulated taxi, with meter. All is regulated and airport to center is regulated, 34 EUR and 54 EUR at night. 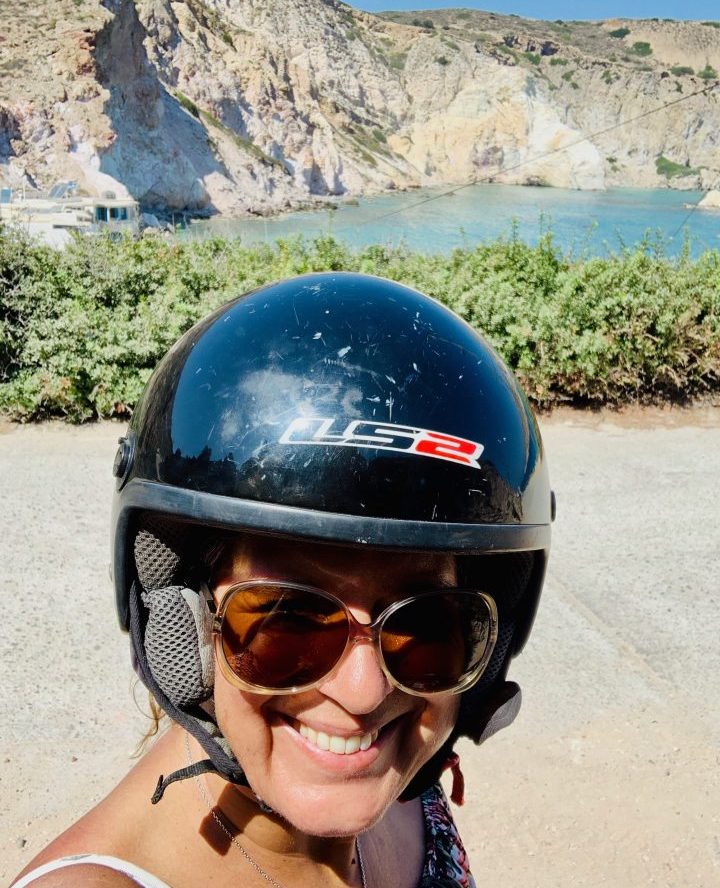 I stayed only two or three nights at one place. I understand this is not the way of traveling everybody likes and can do, but the Cyclades is perfect for that. The types of accommodations are endless but not cheap. From Airbnb, B&B, resorts, apartments, boutique and normal hotels name it. I stayed in all except the resort. Most of the time I booked the accommodation directly or via booking.com. In my separate blogs I will discuss the accommodation in detail.

Food in the Greek Cyclades

The kitchen in Greece is very divers; meat, fish, feta, olives, fruits, wines, pasta all fresh from the farm land or sea. Breakfast is simple with Greek yogurt, honey and some nuts or fruits. In the hotels they offer a more extended version of breakfast. I loved the Freddo version of the coffees, they drink it during the whole day, but I noticed a lot people drinking it a lot around 17:00 – 18:00 with some cookies. 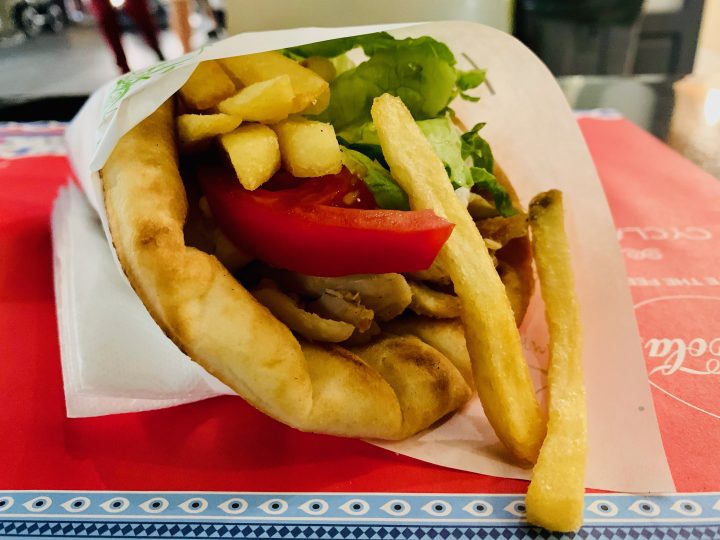 The kitchen in Greece is known for the Gyros, Moussaka, Souvlaki, Tzatziki, Feta salad and so on, but you can get a more refined dishes with meat and fish as well. The Italian and Turkish influences are strong, pasta and baklava can be eaten all over the Cyclades. In all my separate destination blogs for my tips and recommendations on restaurants. 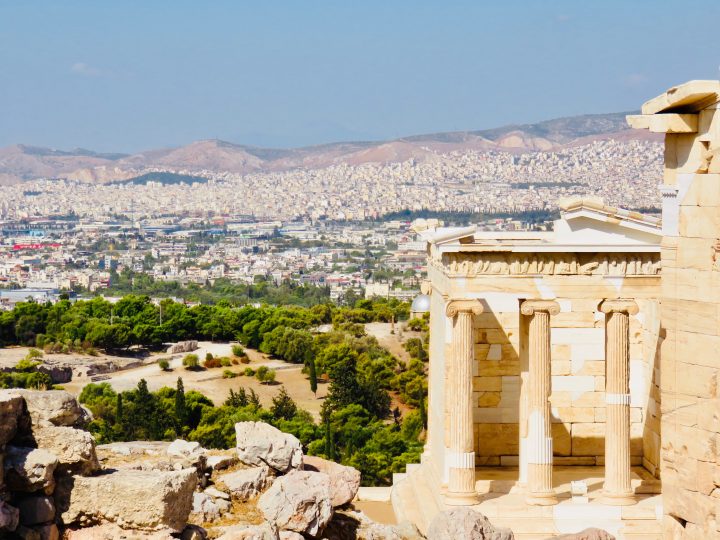 Athens is the capital of Greece and is known for its rich history, with the main highlight the Acropolis. But Athens has more to offer beside the culture...
Read more 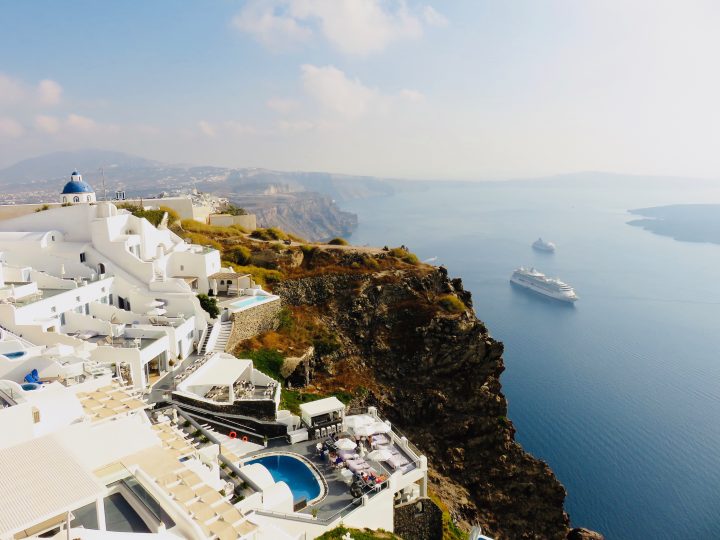 This header says is all: Santorini has spectacular panorama views!! Santorini is unique and on many peoples bucket lists, like mine and 1,5 million tourist per year as...
Read more

The Cyclades name comes from the Greek ‘kyklos” which means circle, Delos the sacred island is the center of this Cyclades archipelago. Delos is located next to Mykonos...
Read more 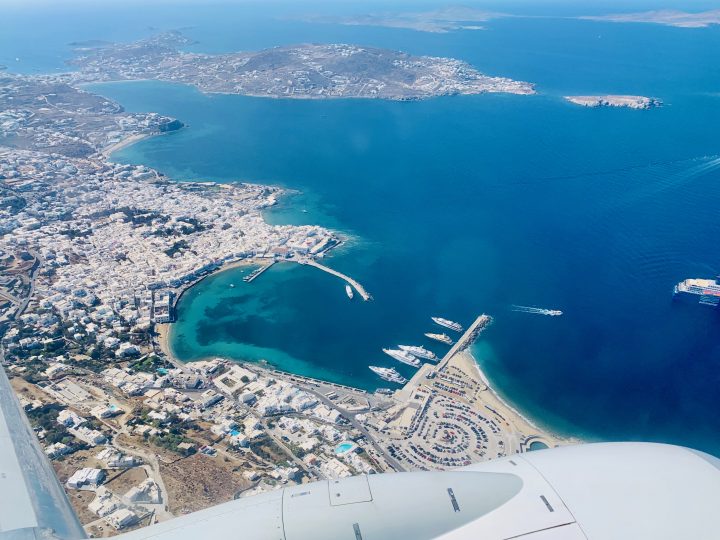 They say Mykonos is the Ibiza of Greece, the party animal of the Cycladic islands! I was curious to find out if this glamour, gay friendly and party...
Read more

Milos is not the most visited Greek Cyclades island, but I don’t understand why?! I liked it the best of all the islands I visited here. Why? Because it...
Read more 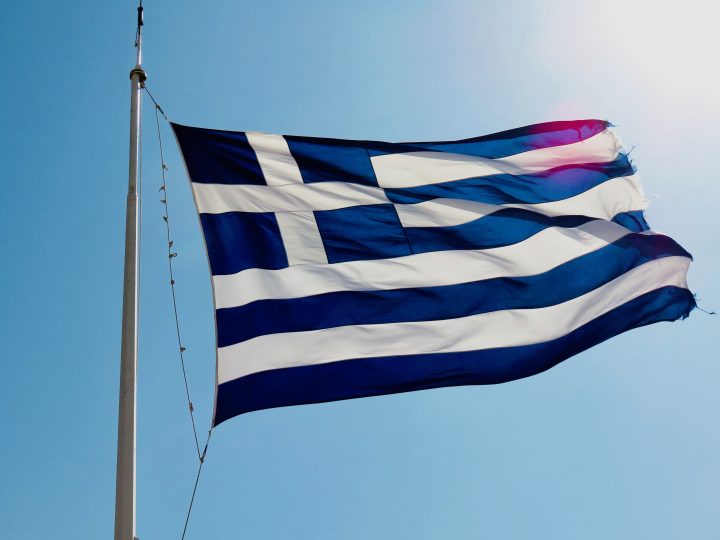 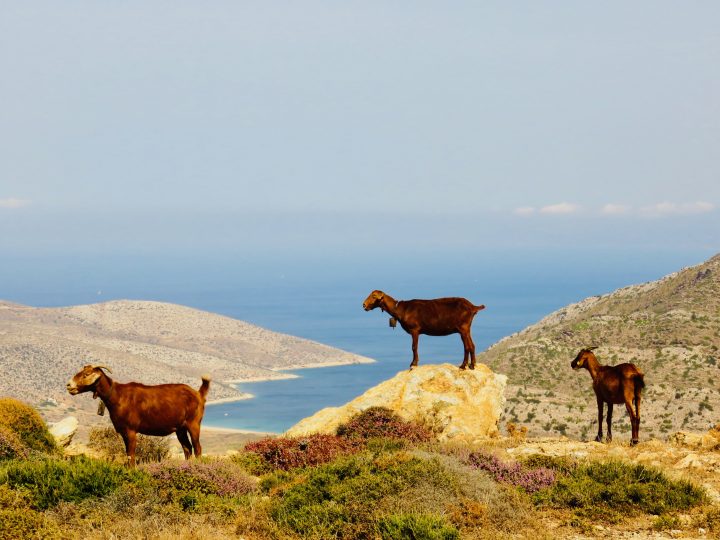 Ios is known as the Cyclades party island, but not in September to be honest. The island was quiet, peaceful, relaxed and I loved it! It was a...
Read more

Scroll to bottom of this page to see all the other inspirations on Greece or see below!!

Tips before you travel to the Greek Cyclades