Sicily is an island in the South of Italy, because Italy is a European Country it is easy to travel. No vaccinations needed and it is safe. Here some tips to check before you leave and some inspirations for your travels. 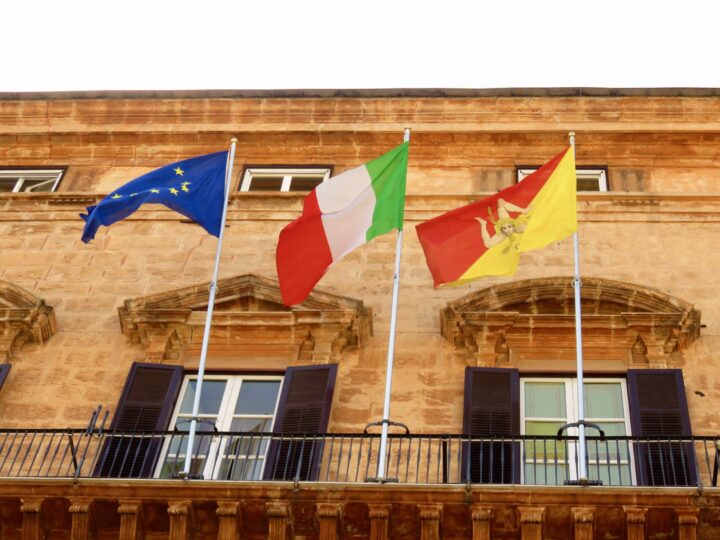 Sardinia is part of the EU so all European citizens can travel without a visa. Please check if your country beforehand if you need a Visa. The Euro is the currency in Sardinia. Cash machines can be found in every city or bigger town. Credit cards are widely accepted around the island. I had to pay the smaller B&B with cash, so make sure you always carry some with you.

The costs are manageable, the best Italian coffee you can get for only 1,20 EUR is a treat of course. And a real Italian ice-cream with two bowls for 2,50 EUR. Pizza from 6-12 EUR and pasta for 13 EUR. The food is delicious so enjoy it!!

My mobile worked via my home network due to the roaming agreement. That was great! Having no time difference compared to the main part of Europe is a big advantage; no jet lag recovery needed!! In Sicily they speak Italian but with my Spanish and English I could manage myself and google translate helped me out too…

Tip: Mentioning the Mafia can be a touchy subject, so avoid it. 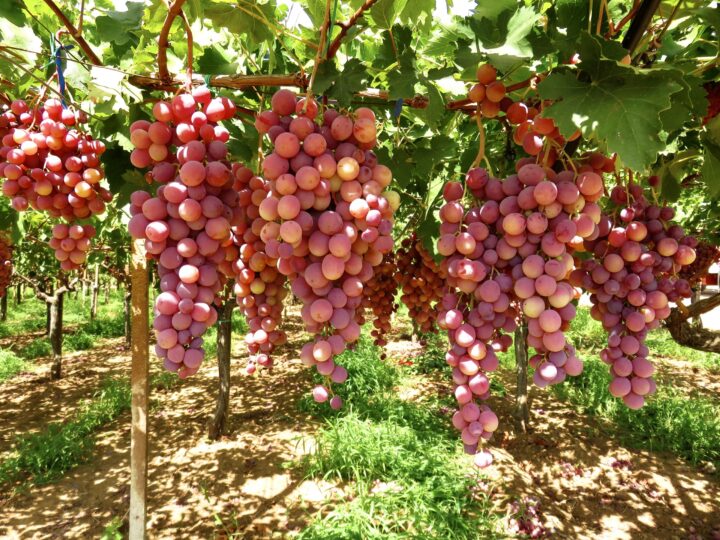 I travelled in September, between the end of the high season and the beginning of the low season. Still the temperature was 28°C and no sweater needed at night. I suggest to escape the high season (July and August) and go in the so called shoulder season (April, May, June, September and October) if you can, the beaches, roads and accommodations are less full and prices are cheaper, while the temperature is still very good. Low season (November to March) could get chilly and rainy, even some hotels and sights will be closed.

I could not get use to the siesta; during 1:00PM and 4:00PM the shops are closed. Be aware that if you are late for lunch the restaurants are closed after 3:00PM and will open only after 8:00PM. It happed to me a couple of times while I was driving that I was too late or too early for dinner or lunch. You could get some fresh fruits next to some of the roads. See in the separate blogs for the food inspirations.

You can reach Sicily by car and ferry from ports in Italy, Sardinia, Malta and Tunisia. By air like I did from Amsterdam (2,5 – 3 hours), but also from the main capital cities in Europe and bigger Italian cities. Sicily has three airports; Catania, Trapani and Palermo which is the capital city of Sicily.

I suggest renting a car, the public transport is not optimal and with the car you are free to drive through the whole island. The distance from Catania in the East is 315 km away from Trapani in the West. Please check several rental car websites, the price difference is huge. I booked via Auto Europe, cheapest price and service is ok. I noticed that the Fiat Seicento (typical Italian car) was way more expensive than the Mini; keep searching for your most favourable car. 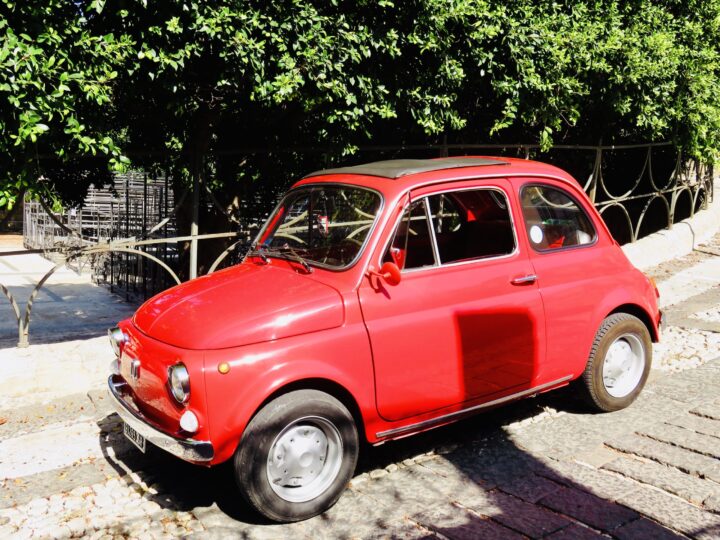 Be Aware: The insurance is very expensive in Sicily, to fully insure the car I had to pay a significant additional amount at the Sixt counter at the Catania airport. They advise you to do that because of the many damages on the island.

The roads in Sicily are mixed, from perfect busy highways with tolls to empty dirty roads. You can take the fast route, but I preferred to take the detour off the beaten track roads through the most beautiful mountains, hills and remote beaches and towns.

Because of being an island, most of the transport in Sicily is via water; Boats, ferries, zodiacs, sailing boats, kiteboarding, surfing boards and kayaks. You can book trips alone the magnificent coasts on very fast, professional and comfortable inflatable boats.

I stayed only one or two nights at one place. I understand this is not the way of traveling everybody likes and can do. But Sicily is perfect for that. The types of accommodations are endless. From the traditional Authentic Agriturismo (farmhouses), B&B, resorts, apartments, boutique and normal hotels name it. I stayed in all except the resort… In my separate blogs I will discuss the accommodation in detail.

Most of the time I booked the accommodation directly or via booking.com. In this corona period, I didn’t book anything in advance but all last minute. With the B&B type of accommodation they want to know the arrival time, which was not easy to estimate sometimes. They contact you via WhatsApp, all very friendly and helpful. In all the separate blogs for each part of Sicily I will tell you where I stayed and what I will recommend you.

The kitchen in Sicily is very divers; meat, fish, cheese, olives, fruits, wines, pasta all fresh from the farmland. During your drive you will see that the Sicilian use every spot of land to grow something! Breakfast is simple with the traditional Italian; a cappuccino and Cornetti (croissant) standing at a bar. In the hotels they offer a more extended version of breakfast, but al lot of sweets to be found on the table. 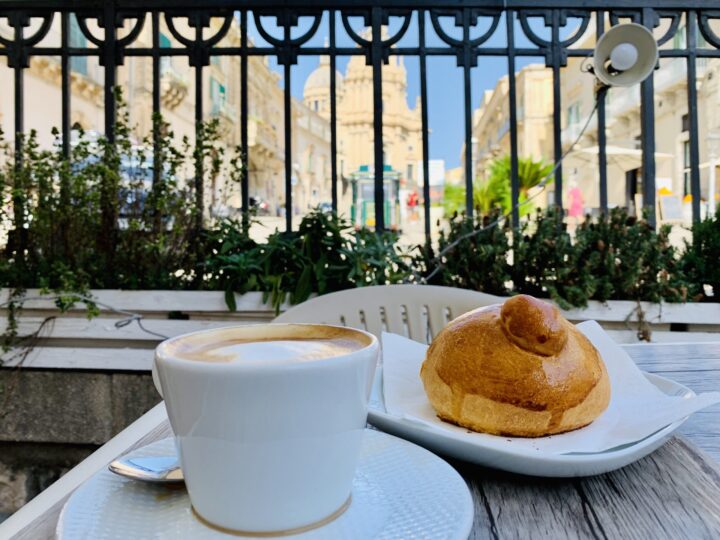 The meals have four courses here, antipasti, primo (pasta or risotto), secondo (meat or fish) and dulce. I normally did not take all four but chose two and sometimes three if I was hungry. What I really liked is the Aperitivo; that is between 5 to 8PM a drink with some cheese and slices of meat (small antipasti).

My Sicilian friend already told me to try the local dish Arancini, rice balls stuffed with meat or cheese, coated with breadcrumbs and fried; it is a very good snack!! Sicily is an island, so indeed had some nice fish dishes, Pasta Vongole (clams) and mussels. Parmigiana di melanzane, a typical summer Sicilian eggplant dish is soooo good! And as you know me, I love dulce. The island’s most famous dulce is the Cannoli, crisp tubes or fried pastry dough filled with creamy ricotta decorated with nuts or chocolate. To cool off in the summer everybody eats the Granita; crushed ice made in different favours. In Bronte near Mt Etna they grow pistachios. 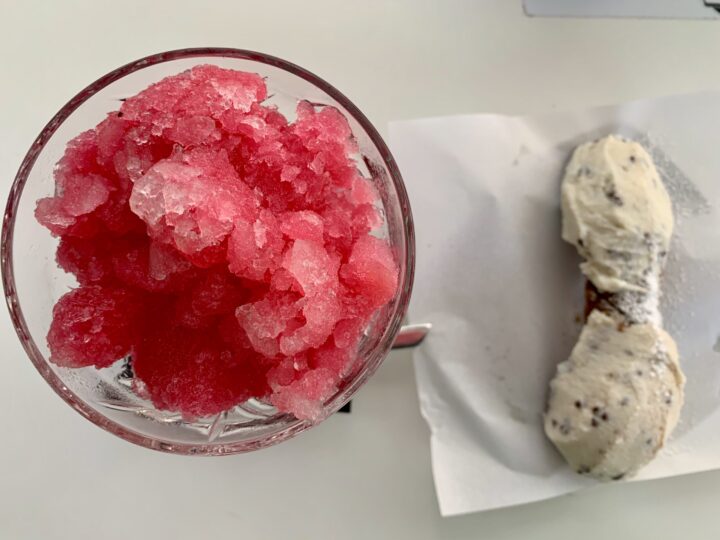 Be Aware: If you go to a restaurant, they charge you the Coperti of 1,5-3 EUR; which are the cost per person for the bread, tablecloth, salt and pepper. Tip is not included!

In the separate Sicilian blog like Southeast Sicily: Syracuse, Marzameni, Noto, Modica and Ragusa  or Palermo Region: Monreale, Palermo and Mondello Beach you will find more on food and restaurants. 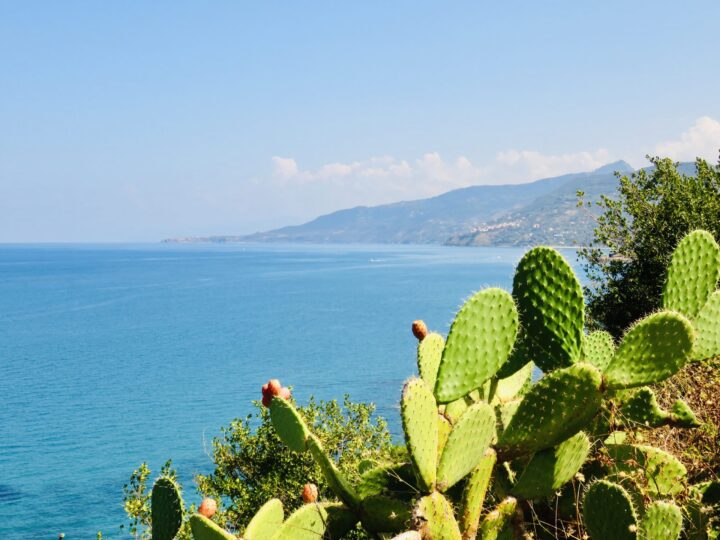 In this Sicilian travel blog, I will give you tips, information and inspirations on the Northern part of Sicily. In this part of Sicily: drive past the dramatic...
Read more 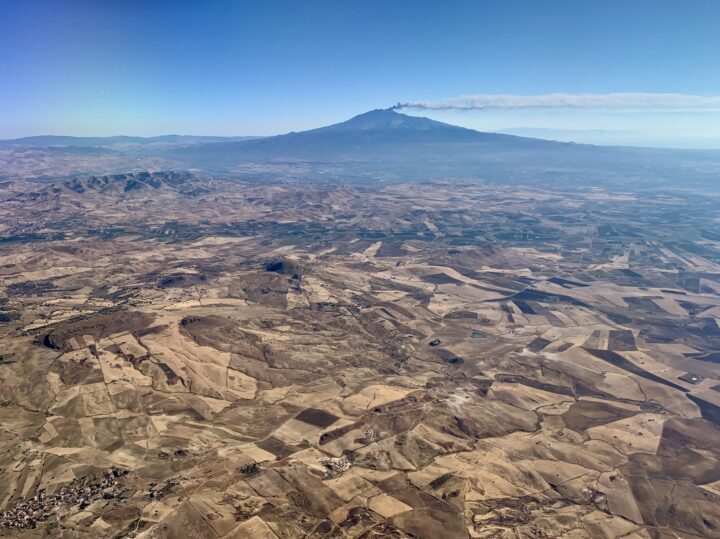 In this East Sicilian travel blog, I will give you tips, information and inspirations on the Eastern part of Sicily; Taormina, Catania and Mt Etna area. Most travelers...
Read more 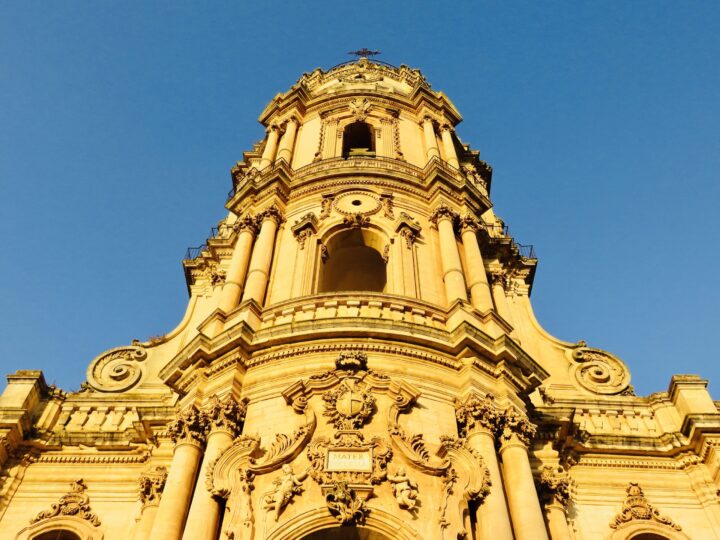 In this Sicilian travel blog, I will give you tips, information and inspirations on the Southeastern part of Sicily. In this part of Sicily, you can find historical...
Read more 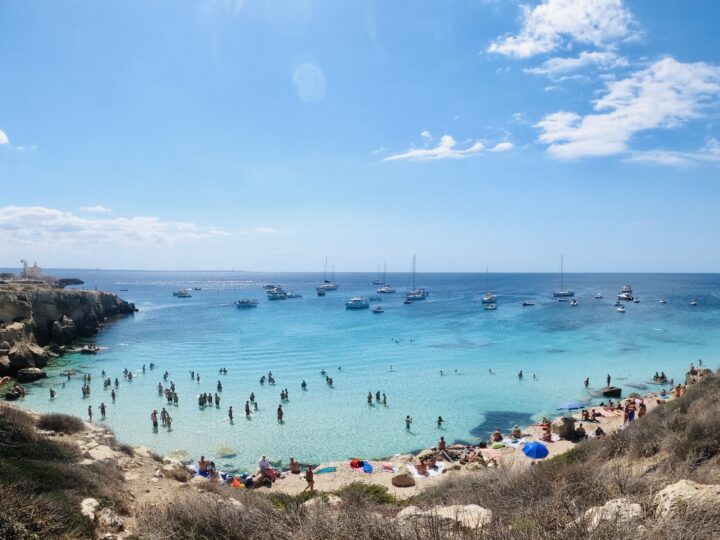 In this Sicilian travel blog, I will give you tips, information and inspirations on the Western part of Sicily. In this part of Sicily: you can do a...
Read more 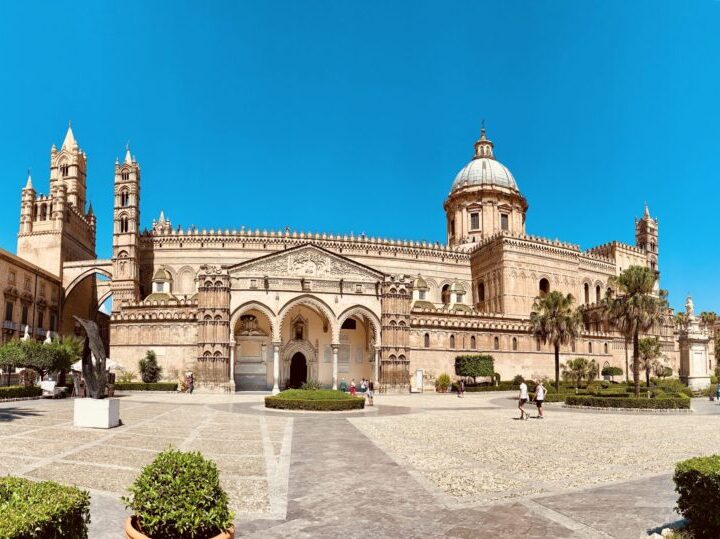 In this Sicilian travel blog, I will give you tips, information and inspirations on the Palermo Region of Sicily. In this part of Sicily: you can see the...
Read more 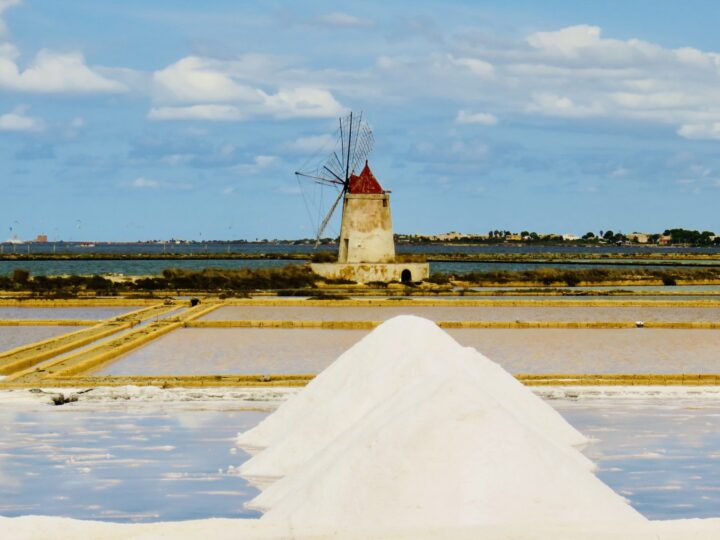 Sicily is an Italian Mediterranean Island; with the most amazing turquoise waters, white beaches, stunning coastline, heritage of architectural pieces from Byzantine to Baroque, the volcano Etna and...
Read more

In this Sicilian travel blog, I will give you tips, information and inspirations on the Southern part of Sicily. In this part of Sicily, you can find historical...
Read more 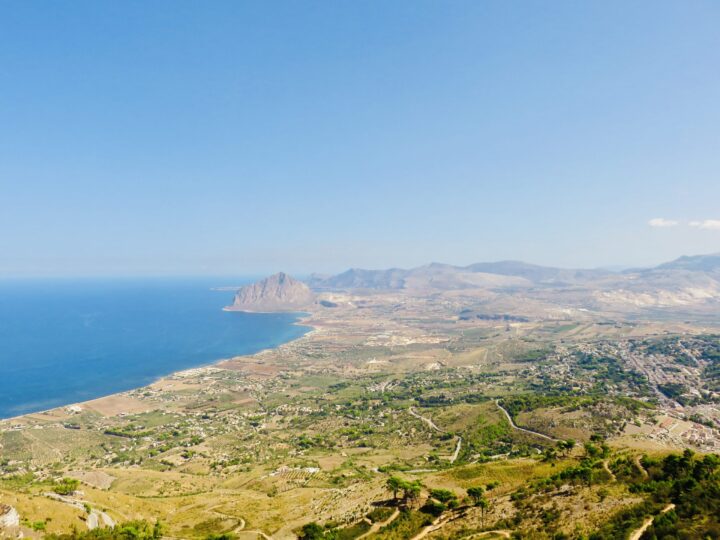 In this Sicilian travel blog, I will give you tips, information and inspirations on the Northwestern part of Sicily. In this part of Sicily: you can visit the...
Read more

Scroll to bottom of this page to see all the other inspirations on Sicily or see below!!

Tips before you Travel to Sicily 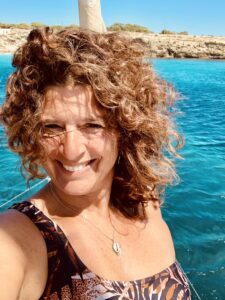